How they got their name...
LEMURIAN SEED CRYSTALS
© 2000 Katrina Raphaell / Revised from Issue #12 of the Crystal Buzz Newsletter

The Lemurian Seed Crystals are mined in Brazil. Apparently they were found at the top of a hill that was being strip-mined for Quartz. These naturally formed generators were found separately in sand and were not attached to clusters. They immediately got attention because they were not like the rest of the Quartz found in clusters in that area. Some, but not all of them, carry a pink to reddish glow. These unique crystals are Clear Quartz but instead of shiny, they appear frosted or dull, like they have a matte finish. Their most unique characteristic is a series of horizontal striations that run up one or more of the sides of the crystal. Generally (but not always) these distinct horizontal striations end in a triangular face forming the apex of the crystal. I knew when I saw these markings that there was something special about these crystals since I had rarely seen more that one or two horizontal markings on Quartz and these crystals can have up to dozens.

When we sat down to meditate with the Lemurian Seed Crystals my first sense was that of a powerful group of beings that were ready and waiting to align with the human mind. There was a sense of urgency and I felt that this was the first time a group of humans had consciously aligned with them to receive information. Through the insight of others in the group we came to understand that these beings existed on the earth plane before the time of Lemuria and were part of the natural seeding of star systems. It was during the last days of Lemuria that these crystals were planted within the earth with their specialized purpose.

Upon receiving this information I immediately thought of the Record Keeper Crystals (see Crystal Enlightenment, Vol. I, pages 65-68). The ancient Atlantians had programmed the Record Keepers before the fall of that great civilization in order to record and safeguard their knowledge. But The Lemurian Seed Crystals were different somehow. We came to understand that these "seed" crystals were not programmed with specific information (as were the Record Keepers) but were rather placed in the rich earth where crystalline growth was expected to form in the coming millennia. These crystals were programmed to transmit frequencies to other crystals that were being created throughout time. A big part of what they relay is the sense of oneness, of unity, of every individual part being equal and no better than any other part and the necessity for love in order to evolve.

It is believed that the race of Lemurians, having seeded our world, left the earth plane for other star systems when life on the surface of the planet could no longer be sustained. However, many of the Lemurians also went into the dimension of inner earth. It is from within that domain that they still care for the earth and are responsible for these crystals surfacing now. Maintaining a clear conscious telepathy with the ones who traveled on to other star systems, this highly evolved breed of beings preserves their own unity.

The horizontal striations actually appear to be lazered into these crystals. It is as if they carry the knowledge of how to maintain unity while being individualized and living on the physical plane. How do we stay consciously connected when we become linear and worldly? How can we love ourselves and everyone else more? How can we care for our environment as if it were our own body? The Lemurian Seed crystals stimulate the limbic part of the brain, which is our most instinctual animalistic part, controlling emotion and motivation. Through the physical nervous system the more subtle cerebral spinal fluid is activated and the etheric bodies are infused with a higher frequency. In doing so it is as if a holographic transmission is received which will help us to evolve our consciousness to include the linear and mundane equally with the divine and the cosmic.

Lemurian Seed Crystals can be worked with by meditating with one while stroking the striations with the index finger of the left hand. If you hold a Lemurian Seed crystal in your right hand while you walk around and encircle something (a person, an object, your house, etc.) that it will create a circle of light protection. They are also extremely powerful to use in grids. Following our meditation session with the Lemurian Seed Crystals we created a grid for the earth using the information that we received. First we placed a globe of the earth in the center of our circle. We were guided to place four Lemurian Seed Crystals in a cross formation, with the terminations pointing towards the globe. (This four pointed cross can be done to enclose a grid, around a crystal healing recipient, or around a defined space to set up the holographic connection). On top of each of the crystals beautiful pieces of green Selenite were placed to project spiritual healing around the planet. Within this space, hundreds of shiny tumbled Hematite encircled the globe for protection and to assist in the grounding of the collective light body. A Blue Obsidian pyramid was placed on top of the globe with four Blue Obsidian spheres in between the Lemurian Seed crystals to bring in peace and hope. (A photo of this grid can be seen in the Crystal Buzz Newsletter #12).

When we all stood holding hands around the grid to activate it the energy was so strong that everyone had to breathe very deeply. We sent the unity and love that we felt into every prison, hospital, war zone, orphanage, military establishment, school, home and heart of everyone on the planet. The presence of the guardian beings was very strong. Again, I felt a sense of urgency and felt how important it is to keep my own holographic connection and learn to pray on that all-inclusive level. We left the grid set up for over a week and everyone that saw it felt the energy and were uplifted by it.

The Lemurian Seed Crystals will be attracted to people who can actively assist in anchoring the energies that will aid the planet in these times. They have not yet been fully activated but are helping to set a strong foundation for the original blueprint of love flourishing throughout creation. As we grow in awareness of the primal unity of all things and open our hearts more the Lemurian Seed Crystal transmission will permeate. Stay tuned. 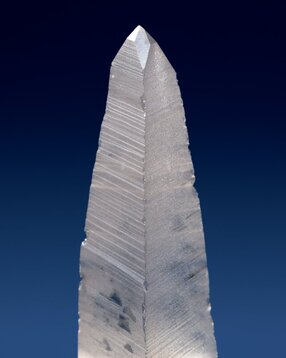 Muzo Growth Habit
From: The Quartz Page Website, an excellent  source for all things Quartz ~ http://www.quartzpage.de/crs_habits.html

In a crystal with Muzo habit the m prism faces under the z rhombohedra get replaced by a prism consisting of alternating z and m faces. In extreme cases the result is a crystal that does not show six but only three very steep prism faces. The cross section of the upper part of such crystals can be perfectly triangular, while the lower part of the crystals usually remains six-sided. The striation on the prism faces caused by the alternating types of faces can be well visible but also almost absent.
The Muzo habit looks a bit like a very trigonal Tessin habit, but in those the m faces alternate with steep rhombohedral faces, not the r or z faces.
This habit has first been described by Gansser (1963) on crystals from alpine-type fissures in shales of Cretacean age near the village Muzo (more famous for its emerald deposits) in Colombia, but has also been found on rock crystals from pegmatites in Minas Gerais, Brazil, and alpine-type fissures in Switzerland.
​


​This crystal is an ideally formed Muzo habit crystal that completely lacks the prism faces under its r faces. Under the z faces at the tips one can see interspersed steps of more z faces on the prism.

As you can see at the central shiny face at the tip of the crystal, the r faces become rhomb-shaped, and instead of prism faces we find jagged edges under them.

The crystal is perfectly clear but has a roughened, naturally etched surface. The triangular patches you see at its base are Brazil twin domains.

​The crystal is from Joaquim Felício, Minas Gerais, Brazil. 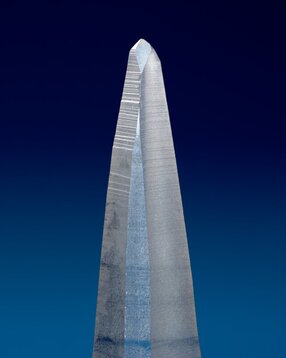 This is a more typical example of Muzo habit crystals.

In the lower part of the crystal the m prism face under the r rhombohedral face is still visible.

Towards the tip, as more and more steps of rhombohedral faces appear on the neighboring prism faces, these get more inclined to the center, and as a result the central face finally disappears.

​This rock crystal is from the same mine at Joaquim Felício as the one in the former image.
​
The Lemurian Seed Crystal Beds.... 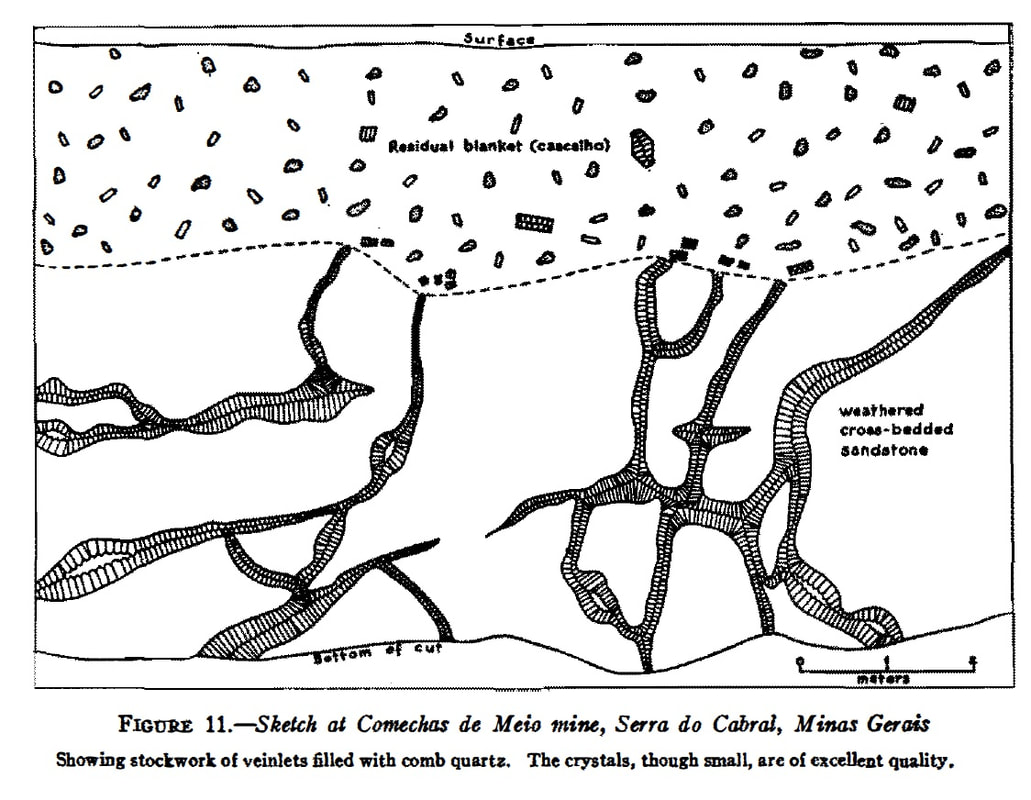